The 20th Century saw a phenomenal growth in aviation, both on land and at sea. Military flying first started in the Navy, with the first ever sortie flown on 14 November 1910 by Eugene Ely, when he took off from USS Birmingham.

Flying at sea is extremely exacting. Heavy seas, strong winds, rain, no ground features and low visibility make landings on a ship a very exacting art. These problems grow exponentially on dark nights, when there are no external features/lights and zero visibility. Landing on a ship on a pitch-dark night or carrying out dunking with anti-submarine helicopters at 40 ft above choppy seas, require exceptional skills.

Then to store and operate upto 35 aircraft in the confined spaces in the hangar and on the flight deck of an aircraft carrier are jigsaw puzzles!

This chapter gives the history of Naval Aviation (Naviation), aircraft procurement and the training of naval aircrew in the formative years of the Indian Navy. This is what Capt Pran Parashar (one of India’s first naval aviator) had to say:-

When I was the naval ADC to Lord Mountbatten., one day he called me and said, “Pran, I have just convinced Pandit Nehru that the Indian Navy must have aircraft carriers and I want you to volunteer for flying. This led to a handful of Indian officers being selected for training in the UK. Of course, we already had a pilot in YN Singh. He had done flying during World War II.

This chapter deals with the inception of the Seahawk in 1944, when Hawker Aircraft Ltd conceived plans to develop jet fighters, its first flights, trials from an aircraft carrier and the final production of the Seahawk Mk VI version. The Seahawks were first produced by Sir WG Armstrong Whitworth Aircraft Ltd and later by Hawker Siddeley Aircraft Ltd, for four Navies of the world.

An article by Mr Ray Williams describes the history of these aircraft, their growth in the Royal Navy and their participation during the Suez Crisis in 1956 (Operation Musketeer). 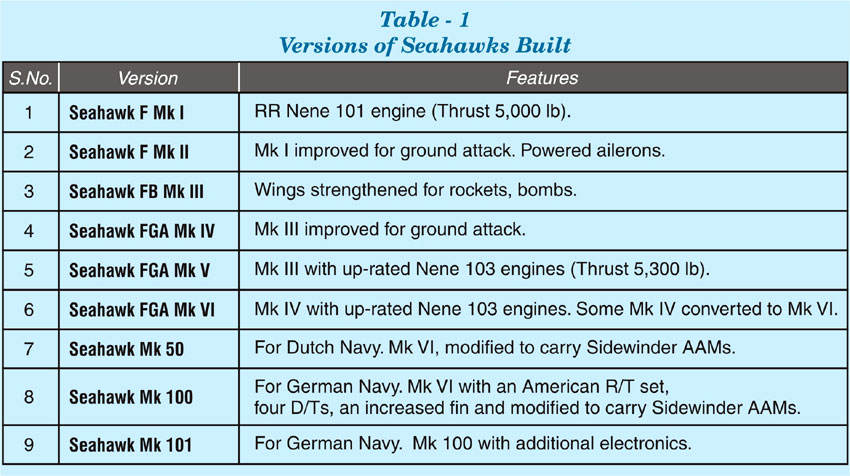 Soon after the Seahawks first embarked on an RN carrier, the Dutch Navy bought 22 Seahawks (Mk 50) for their carrier, RNLS Karel Doorman. A year later, the German Navy acquired 68 Seahawks (Mk 100 and Mk 101). This chapter gives the details of these aircraft, as also their modifications to improve their armament and fuel efficiency. It also has an account by their former German Chief of the Naval Staff, Adm Günter Luther, who flew this aircraft in the late fifties. Inputs from RAdm W Engelmann, WGN and by Cmde Anne van Dijk, RNLN have also been included.

CHAPTER 5 : PURCHASE OF SEAHAWKS AND VIKRANT

This chapter is devoted to the circumstances which led to the commissioning of Vikrant and the purchase of the Seahawks. The Indian Navy became the last Navy to purchase 14 brand new Seahawks Mk VI, along with a mix of 32 older RN Seahawks Mk III, Mk IV, Mk V and Mk VI.

It also gives inputs from Capt PS Mahindroo, Vikrant’s first Commanding Officer, upto the time that the carrier  got commissioned.

This chapter gives the commissioning of 300 Sqn in July 1960, the Indian experiences in England and operations from Vikrant, after the first Seahawk joined the Indian Navy in January 1960. Besides the work-up and experiences in the UK, it also has the work-up in the Mediterranean, in Malta and then the arrival of Vikrant in Mumbai in November 1961.

It includes articles by Adm Sir John Treacher (then on temporary duty from the Royal Navy, to train Vikrant’s air department) and by many senior Tigers. The participation of Vikrant and the Seahawks during the Goa Operations in December 1961 is also included.

After Vikrant came to India, in their initial year the carrier and the squadrons had quite a task preparing for and becoming proficient in air operations. This was also the period when INAS 300 went to the Himalayan foothills (Gorakhpur), to learn techniques of how to defend our country in a battle far away from the sea. It was also the first time that the India’s Navy, Army and the IAF practised Tri Service Co-operation.

CHAPTER 9 : FERRIES FROM THE UK

In an effort to save some money and particularly foreign exchange, sixteen second-hand Seahawks were ferried from the UK (in six batches) by Indian pilots. The intricacies involved in these month-long ferries, halfway across the globe and with no maintenance crew, speaks volumes of the skills of these young Tigers, who flew these aircraft and also did all servicings on their own during these ferries.

A young maintenance sailor of 300 Sqn was very enamoured with flying and desperately wanted to become a naval pilot. His efforts to do so were denied by Naval Headquarters. He then made up his mind that he had to fly the Seahawk!

One bright, sunny morning off Chennai, he did so – without permission, learning procedures and with no briefings/ clearances!

The weddings of two 300 Sqn pilots had been planned for 12 May 1965. However, Vikrant was at sea, waiting to go to war. How these pilots finally tied the ‘knot’ is related here!

After India purchased 46 Seahawks (14 new and 32 reconditioned ones) from the UK, it soon became apparent that the Indian Navy would run out of serviceable Seahawks to fight any battle! A secret deal was then struck with the German Navy for 28 second-hand Seahawks. With the purchase of these Seahawks, we continued to fly these aircraft for a total of over twenty years. In fact, the German Seahawks played a very crucial role on Vikrant during the 1971 War. In contrast, the British, Dutch and German Navies had stopped flying Seahawks within seven years of their induction.

One role that the Seahawk had to perform was its capability to photograph enemy defence installations and ground features. After analysing these, air strikes could then be launched on these targets and their weak areas. This procedure soon had the Indian pilots learning techniques on how to obtain the best aerial photographs of Seahawk formations.

The Nehru family was actively involved in ensuring that India had a strong Navy, as also aircraft carriers, even though money constraints loomed large! Pandit Nehru, Mrs Indira Gandhi and Mr Rajiv Gandhi all spent considerable time on board our aircraft carriers. Since in those days, these visits were far away from the rigours of Statehood and without any telephonic contact with the Cabinet, it was a treat to have them on board for many uninterrupted outings.

Operating and maintaining two operational squadrons and a helicopter flight on board an aircraft carrier of a size as small as Vikrant was a stupendous task. This chapter highlights the intricacies involved in overcoming these challenges, especially when the carrier was at sea, with little support from shore bases.

Ever since aircraft started embarking on ships, the role of an aircraft carrier, during any war at sea, became very important. The Indian Navy was not able to do very much during the 1965 War, because the carrier was undergoing a refit and was in dry-dock. The major role played during the 1971 War, by Vikrant and 300 Sqn, is highlighted in this chapter. It also includes aspects related to PNS Ghazi being sent to the Bay of Bengal to sink Vikrant and the American decision to deploy USS Enterprise in the Indian Ocean so as to deter India.

During the long tenure of Seahawk flying from Vikrant, there were many events that were really challenging. These also involved the pilots trying out many innovations. Though most data on the history of Indian Naviation is available from published sources, this chapter highlights certain experiences and aspects which are not too well known, even to the personnel currently serving in the Indian Navy.

This was a unique incident, which happened when the Sqn Cdr of 300 Sqn, Cdr Peter Debrass, was being launched from Vikrant. Due to a mechanical failure during his launch, the Bridle connected to the Seahawk got disengaged from the Catapult just before it fired. Since this Seahawk did not have enough speed to get airborne, it just fell into the sea. Peter‘s experience is perhaps the only case in the world that resulted in a successful ejection underwater.

Whilst Indian Seahawks have played important roles and handled under difficult circumstances, two incidents stand out!

Seahawk IN 196 was the last Seahawk that India purchased from the UK and yet most foreign books have not listed its presence in the Indian Navy. This is perhaps because within 18 months of its arrival in India, India lost this Seahawk after a mid-air collision.

Seahawk IN 238 (German number VB 134) was another interesting aircraft, which the Indian Navy gifted to the German Navy for display in their museum.

This chapter gives accounts of various 300 Sqn pilots, who had serious emergencies whilst airborne and how they handled them. Some incidents are indeed unique and though the Indian Navy lost many Seahawks, as also a few pilots, the training and maturity of the actions taken by most of them very clearly. It also has some interesting aspects relating to survival techniques, both in the jungle and at sea in a dinghy. Two lists give details of all major Seahawk accidents of the Indian Navy.

In early 1978, Naval Headquarters took a sudden decision to stop all embarked Seahawk flying. This was to strengthen their case with the Indian Government to get new fighter aircraft for our Navy. In spite of an empowered Committee and 300 Sqn having formally requested NHQ to not do so, as this would result in a break in embarked fighter flying, NHQ over-ruled both recommendations. This then resulted in the Indian Fleet having no fighter flying or strike capability available on Vikrant for over five years. It was only in early 1984, that our Sea Harriers first embarked on board the carrier.

This chapter also narrates how NHQ denied VAdm Shekhar Sinha his first deck landing, even though he was fully ready!

This chapter deals with some naval museums in India and discusses not merely the Naval Aviation Museum at Goa and the erstwhile Indian Museum Ship Vikrant, but also three other museums that have been set up for public display.

The fact that these museums need special attention and much greater co-operation between the Government and the Indian Navy, so as to preserve India’s Naval history and artefacts, is explained in this chapter. Since the first publication of this book, the Government of India has unfairly sold INS Vikrant as scrap. Thus, the possibility of displaying her role during in 1971 War, along with other important aspects of India’s naval history, has forever been lost for the public.

CHAPTER 23 : MY TENURES AND EXPERIENCES

The last chapter gives a few details of the author’s tenures on Seahawks and some of his experiences. These include an exercise at sea between HMAS Melbourne and INS Vikrant in 1977, some search patterns and the special techniques adopted to ensure that this basic aircraft, with no modern navaids and systems, could still perform all wartime tasks.

Army CBGLOs (Carrier Borne Ground Liaison Officers), who were an integral and vital part of 300 Sqn right through the Seahawk period, have also been included.