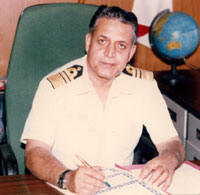 In 1967, he was the first Naviator in an IAF-Navy pilot exchange programme, where he flew the Mystères. In 1971, he went to England for a Photo Reconnaissance Course with the Royal Navy. On return, he went back to Vikrant for the 1971 War.

In 1986 he went to Plymouth to commission India’s second aircraft carrier (ex- HMS Hermes) as INS Viraat. After he became an Admiral, he remained associated with naval aviation operations and soon took over as the Flag Officer Commanding-in-Chief, Eastern Naval Command, followed by FOC-in-C, Western Naval Command.

After retiring in 2002, he settled in Pune. His first love still remains flying and he regularly goes for gliding.